I had the opportunity to visit Bayerischer Bahnhof this past summer on our trip to Germany.  Bayerischer Bahnhof is located in Leipzig, in the old Bavarian train station located near downtown.  I’ve been here several times over the past few years and I really dig the style of renovated train station, modern menu, combined with biergarten, stammtisch and traditional German bier hall.

Here are my notes from the trip (from Facebook).  I’m going to do a “Best of the Best” series to open up some of the posts from Facebook to a wider audience.

Bayerischer Bahnhof Leipziger Gose. A lot of notes to write, so bear with me. Here’s a glass of Gose and pretzels at the Bayerischer Bahnhof Biergarten. Every town in the U.S. needs a place like this. It’s a beautifully restored old train station, but feels very contemporary and has good German, yet progressive food. Nice relaxing Biergarten, in downtown Leipzig. Lots of families, businessmen, students coming and going. And a playground for the kids. The Gose is pretty much as I remember, and really not too far off from what I’ve brewed in the past. I think I know what to improve next time, but it’s on the right track. 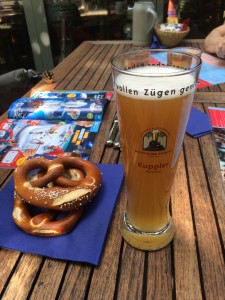 That day was brew day and they were brewing Schwarzbier. We sat right by the door next to the mash tun and brew kettle. I had a chance to meet and talk to Matthias, the head brewmaster at Bayerischer Bahnhof, and talked a bit about Gose. 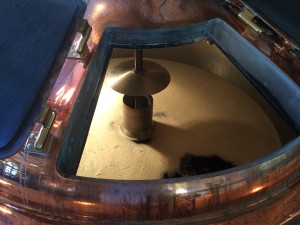 Process Notes: They have a lactobacillus fermenter in the basement that generates the lactic acid, that they then add to the beer before boil. They’re fermenting (as expected) with a clean German ale yeast…he clearly stated (as already known) not to use Hefeweissen yeast. 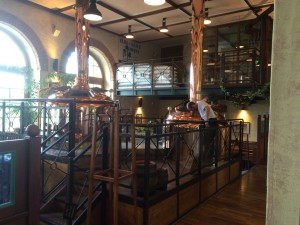 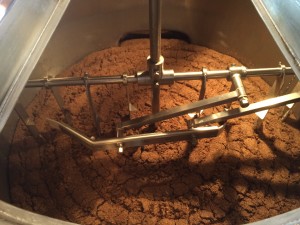 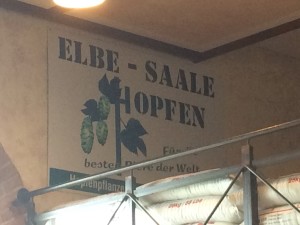 Salt: Matthias noted that Gose originally brewed in Goslar didn’t have salt added as the water was already mineral rich (as I’ve noted in other Gose posts…Goslar was known for it’s mining and the water was really just crappy brewing water they had to deal with). I say this every time I see a Gose post…they’re not trying to brew Margarita’s. The salt should be barely noticeable…likely only if you have a really good palate. Mathius said they add some to get that minerally effect (and it softens the beer), but it’s not a key ingredient for prominent saltiness.

Spruce: originally, in Goslar, Gose was sometimes brewed with spruce tips. They acted as a filter during lautering to help make cleaner wort. Bayerischer Bahnhof brewed some last year as a specialty beer. The spruce added a note similar to what you would get with sathi.

Souring: Gose was originally fermented over around 4 days, then lagered for 2 weeks. Three basic kinds served. Young (after 2 weeks): minimal souring. Medium: weeks to months, firmly sour more like Berliner Weisse, and really sour, like Belgian Geuze, if aged a long time. Gose was originally sour just simply due to brewing conditions and infection. The longer you waited, the more sour. Gose was delivered to a bar while it was fermenting. It would then finish off in the cellar and then served.

So basically Gose was a beer brewed with crappy water in a place with limited access to hops. The grain bill was probably just whatever random grain they could get, with whatever quality (probably not good) malt they could get or make. They couldn’t control infection, so it ended up sour. Mathius laughed that it’s far more popular outside Germany than it is here. I’m sure it was not unique for the times…as breweries like PU were introducing Pilsner that would eventually dominate the market.

Entrance to the Biergarten: 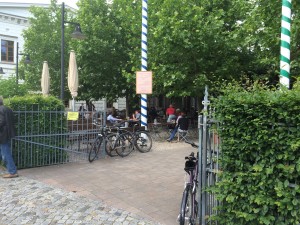 Model of the old train station: 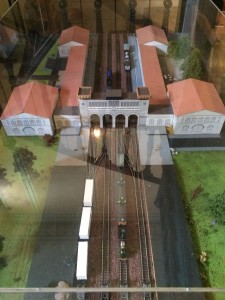 Inside Bayerischer Bahnhof (looking from the brewery to the bar)

This entry was posted in Brewing Process, Community, Ingredients, Styles and Examples. Bookmark the permalink.